'I can't believe it's me:' Raleigh man homeless 20 years enters PhD program with honors, awarded for being hero to others :: WRAL.com

After experiencing homelessness on the streets and shelters of Raleigh for 20 years, Michael Watkins says it feels surreal to be in a doctoral degree program.

During those two decades without a home, Watkins admits he sometimes feared he wouldn’t wake up each morning – and sometimes, he says, his peers didn’t. But even struggling with basic needs like finding food, finding a place to sleep and battling drug addiction, Watkins says a love of serving others and a desire to make an impact on the world eventually pushed him to make a big change.

As a teenager he had told his mother of a lifelong dream to earn a doctorate degree.

“My mother always pressed upon me to go for it,” he said. 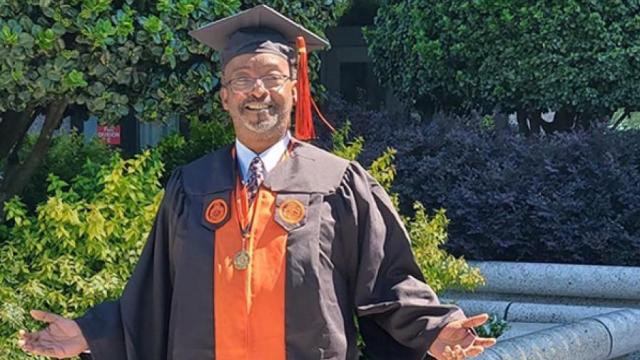 But when she died, he saw his life was not headed the direction he had originally dreamed.

“I was looking in the mirror and I realized I didn’t recognize myself. I wanted to be someone else,” he said.

As soon as Watkins decided to change his life, he hit the ground running – and as his resources grew, he began using them to help others. He didn’t know it then, but he was on the path to four college degrees – including his current doctorate program. And in time, even President Obama would thank him for his life of service to those in need.

While he was still working his way out of homelessness, Watkins got busy training to be an Emergency response volunteer with the Red Crosstraveling into disaster zones where families were faced with a reality he knew all-too-well: Homelessness.

When he traveled into Alabama and Louisiana to help after Hurricane Katrina, the unfathomable amounts of pain and loss he saw put his own struggles in perspective.

“The things I saw – and smelled – were unbelievable. When we got to the bridge, there were mausoleum parts. I saw mold that looked like a forest, literally. You could smell it for miles,” he said.

He saw bodies covered with tarps in the streets. He passed out food and water to those in need. But his primary job was to interview those who survived, to allow them catharsis by telling their stories.

“The stories I heard… of heartbreak, loss, death. We did this 12 hours a day. At the end of every day, most of us were crying like babies,” he said. “But, although we couldn’t replace everything they lost, it was an honor to be there for them and do what we could.”

Watkins went on to volunteer with the Red Cross during the Texas floods in 2016 and the Oregon wild fires in 2020.

He says service to others is a great way to ensure he never focuses too much on his own worries.

When he holds up a thank you letter he got from President Obama, honoring his work, he beams. 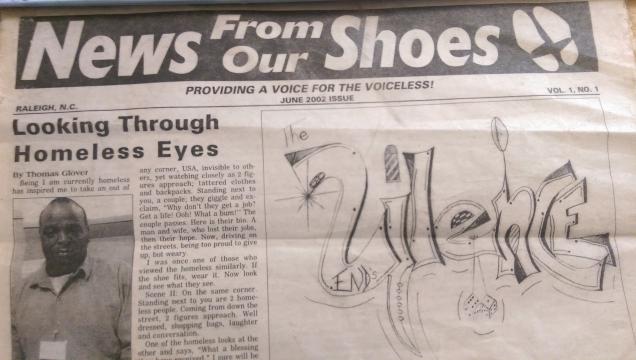 News from Our Shoes: A newspaper for the homeless community in Raleigh

Interviewing those in need was second-nature for Watkins, who had founded a newspaper by and for Raleigh’s homeless community several years before.

At the time, Watkins was in transitional housing at the Emmaus House in Raleigh. He wanted to create a publication that would allow people living in homelessness to have a platform – to showcase their talents, to use their voice and to help break stereotypes about people without housing.

“Everything that was printed was done by those who were homeless, all the artwork, poetry and writing. It gave them a chance to show off their talents,” said Watkins.

Watkins kept working his own way out of homelessness, while simultaneously using what he was learning to help others.

“One of the pitfalls of moving out of homelessness is learning to trust others again. So many people won’t even look you in the eye when you’re homeless,” he said.

Through his work in the newspaper, he began connecting with people who would help lift him up.

“I connected with a family that came to the shelter and wanted people to come and have Thanksgiving at their home. I didn’t want to go at first, didn’t want to be the topic of someone else’s Sunday dinner,” he said. “But they enveloped me like they’d known me for years.”

One by one, Watkins met people who pulled him closer to his dreams.

“So many people who are homeless, we need a hand up, not a hand out,” he said.

Alongside his awards, degrees and letters from Obama, Watkins has a wall of photos of the people who helped shape his life into what it is today.

“We don’t do it alone. We do it together,” he said. “Each day, I wake up and I make good choices because I want to make them proud of me. I want them to feel I was worth their investment.”

Becoming Dr. Michael Watkins has been his life’s dream.

In 2015, he made the brave decision to go back to school.

“I was scared! I was sitting with all these young students, and I felt like I didn’t fit in,” he said.

He started with an associates degree in medical office administration. A photo of him in a cap and gown showed up on his social media feed, and dozens of encouraging comments rolled in.

“Although I was proud of that accomplishment, I wanted more,” he said.

So he transferred to Campbell University – a college he’d always dreamed of attending. He graduated in 2020.

“Again, I was proud of that accomplishment, but it was not yet enough,” he said. “So I began pursuing my masters at Walden University.”

He has just one more achievement left to pursue: A doctorate degree.

He was accepted into that program this year, and intends to be Dr. Michael Watkins within two years.

He says he’s still scared and hardly believes how far he’s come. Now, instead of sitting among students 20 years younger than him, he’s sitting among doctors and surgeons – still feeling intimidated, but still as determined as ever.

“All these high-level experts, and here I am: Just a former homeless man who’s going back to school,” said Watkins.

As he studies healthcare administration among his professional-level classmates, Watkins believes he has a unique insight to offer the healthcare world: Uncovering gaps in medical care for people experiencing homelessness. He hopes to pursue this research, finding yet another way to help serve those in need – just as other people helped him.

80 years later, Cary family gets closure for loved one killed at Pearl Harbor