'Married At First Sight' Exclusive Preview: Airris Admits To Jasmine It Will 'Take A Lot' For Him To Fall In Love

Considering both the Buffalo Bills and Detroit Lions rock blue as part of their colors, it’s no surprise that Bebe Rexha was picked to perform at their Thanksgiving showdown. Fresh off of her appearance at the American Music Awards, Bebe, 33, and David Guetta hit the gridiron of Ford Field to perform a medley of hits. Starting with a head-turning version of “Me Myself And I” – literally, since she stood in front of a kaleidoscope of mirrors — Bebe then transitioned into David’s “Hey Mama” as green lasers blasted all over the place and a bevy of goth backup dancers got down. “Detroit, if you know the words, sing along,” said Bebe before playing “Meant To Be,” her collab with Florida Georgia Line. From there, Bebe told Detroit she was good, resulting in a series of blue-clad backup dancers joining her on stage for her performance of “I’m Good.”

Dude!! @BebeRexha‘s Halftime Show was AMAZING!!! The dancers were AWESOME! Love the homage to Eiffel 65 w all the Blue! 👏👏👏🔥🔥🔥🔥 pic.twitter.com/WbVjvKSv6L

SOUND CHECK!!! So excited to perform at the @detroitlionsnfl Thanksgiving Halftime show today at 12:30pm on @cbstv ! #BUFvsDET DONT MISS IT 💙💙💙 pic.twitter.com/IWIYRyLxPb

Bebe and David previously worked on songs like “Hey Mama,” “Say My Name,” and a remix of “Last Hurrah.” The duo’s reworking of Eifel 65’s “Blue” is actually older than most think, as the two gave it a spin back in 2017. Initially, David didn’t think the song worked, but he premiered it at the Ultra Music Festival that year. Up until recently, that was the first and last spin – until a bootleg video of the performance started making the rounds on TikTok. “I was just scrolling on TikTok, and I heard a girl singing on a remix of ‘Blue,’” Rexha laughs when talking to Variety. “I was like, ‘Damn, David and I had an idea to do that back in the day.’”

It was, in fact, Bebe’s vocals that she was listening to. “I go to YouTube, and it has 30 million views,” Rexha told Variety. “I was told it pops up on YouTube every year, goes viral, and then gets pulled down. 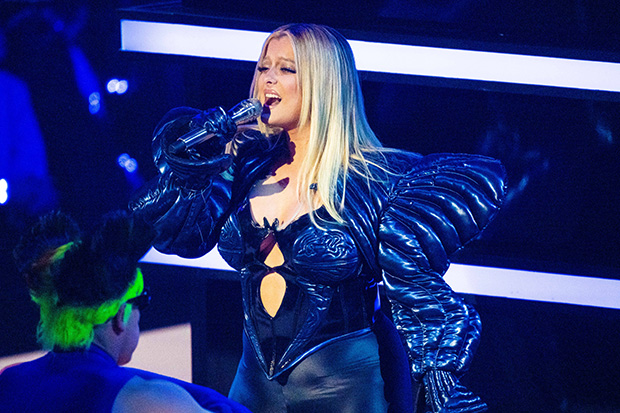 So, she and Devid teamed up to try and capture lightning in a bottle. “We didn’t have much time. I went into the studio, and I literally had, like, four or five hours to do everything I needed to do,” Beba told Elite Daily about the creation of this track. “That was really stressful because I’m a perfectionist, a Virgo, so that was hard. We did what we had to do.”

Bebe also teased that “there’s going to be another collab” coming out soon. “I can’t say what it is, but it’s really amazing. It’s me, a Latin artist, and another big DJ. It’s really incredible. I’m really excited about it. And then in the new year is when I’m hopefully going to be releasing my own music, and I want to go on my own tour — my own Bebe Rexha tour because I haven’t been on a Bebe tour in, like, four or five years,” she said.