Britney Spears Responds To Report About Her Behavior At Restaurant: 'They Talk About Me Like A Maniac'

Britney Spears issued a statement on Instagram Regarding reports about her that surfaced after an outing on Jan. 13. The singer responded directly to TMZ’s report that she was acting “erratic” while out to dinner with her husband, Sam Asghari. “I’m sure I brought a billion smiles to me looking like SHREK at a restaurant,” Britney wrote. “I know the news is all hyped about me being a little drunk at a restaurant… it’s like they’ll be WATCHING MY EVERY MOVE. I’m so flattered they talk about me like a maniac THEN have the balls to talk about all the negative things that happened in my past!!!” 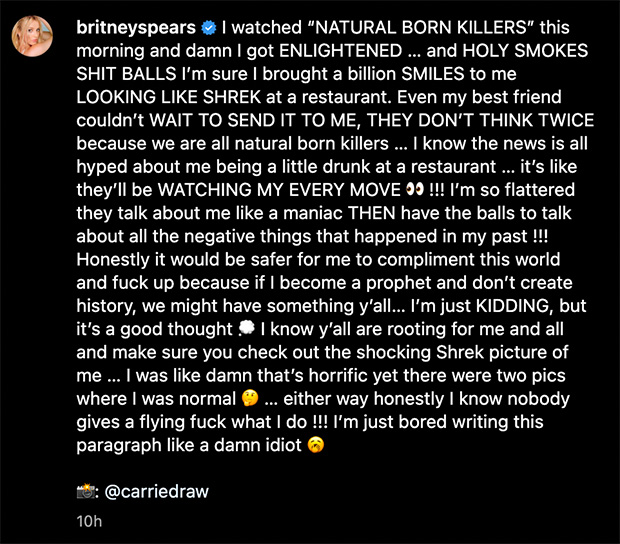 Britney’s message came later TMZ posted a video of her dining out at JOEY in the San Fernando Valley. The site claims that Britney was acting “manic” after she noticed patrons filming her, but that behavior is not clear in the video. It is also unclear if the voice in the video belongs to Britney. Sam is not seen in the video at all. HollywoodLife has reached out to a rep for the singer for comment.

However, Britney did not hold back while addressing the situation herself in her Instagram post. “I know ya’ll are rooting for me and all make sure you check out the shocking Shrek picture of me,” she continued. I was like d*** that’s horrible and yet there were two pics where I was normal. Either way honestly I know nobody gives a flying f*** what I do!!! I’m just bored writing this paragraph like an ad*** idiot.”

In addition to this message, which Britney shared on Jan. 15, she also uploaded a video of herself dancing one day earlier. In the video, she gives the middle finger to the camera, which also seems to be a subtle response to all the buzz about her after the Jan. 13 outings.

Britney Spears & Justin Timberlake’s Dating Timeline: From The ‘Mickey Mouse Club’ To Their Breakup & Through Today