Ashton Kutcher Apologizes To Harry Styles For Not Recognizing Him At A Karaoke Party: “I Feel Like A Jerk”

I’m just going to go ahead and say — we’re always going to love you, Dolly Parton! The country music icon and philanthropist got her party on for New Year’s Eve, co-hosting NBC’s big special, Miley’s New Year’s Eve Partywith, you guessed it, Miley Cyrus! Opening the show with a duet of ‘I Love Rock N’ Roll’ by Britney Spearser, I mean, Joan Jett & the BlackheartsDolly wore a matching, super sexy outfit with her goddaughter. 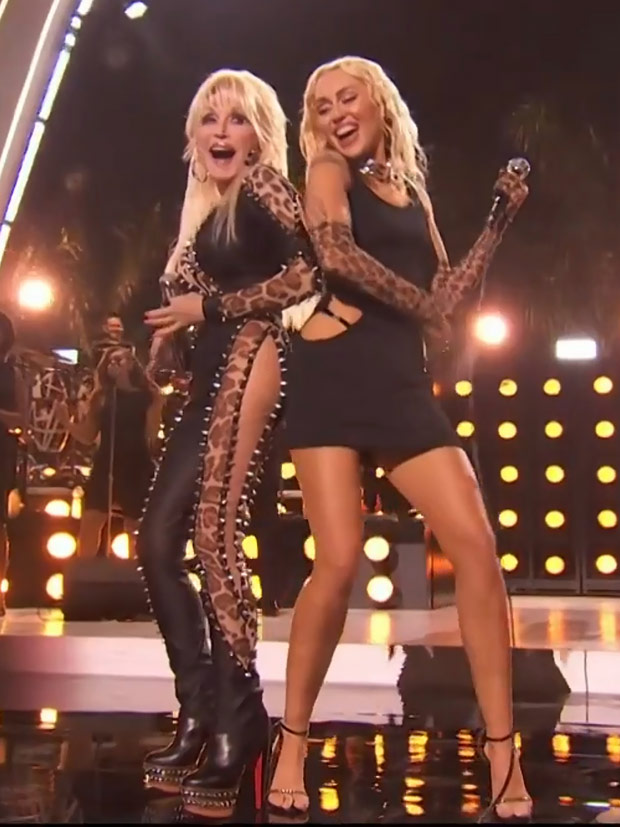 While Miley sported a mini dress with well-placed cutouts to show off her thong, Dolly, 76, strolled out with confidence in platform heels and a leopard, leather catsuit, complete with a very high-slit on both legs. Wowza! When Miley pointed out that this was Dolly’s rock n’ roll look, Dolly was quick to turn the credit right back on her. “Well, you dressed me!” she said

The pair returned to perform again later in the evening, this time Dolly looking like an angel in a long white maxi dress with sheer panels and Miley in a slinky black number? The song? “Wrecking Ball”, of course – until it was segued into “I Will Always Love You”! Can you stand it?!

It looks like it will be a bright new year for both Dolly, and her goddaughter Miley. During NBC’s A Toast to 2022! special, Miley confessed that Dolly helped her land on a resolution this year. “I guess my resolution would really be — my instinct is very loud, but I’m not a great listener sometimes,” Miley told Hoda Kotb. “Dolly was telling me, her husband [Carl Thomas Dean] says, ‘You’re not hard of hearing. You’re hard of listening.’ And I guess that would kind of be my resolution, to not just listen to myself, but listen to others.”

2022 has been quite a year for the legendary performer. After initially declining the honor and creating a bit of controversy, Dolly proudly accepted the invitation to be inducted into the Rock N’ Roll Hall Of Fame. The “Jolene” hitmaker, 76, arrived at the Microsoft Theater in Los Angeles on Saturday, Oct. 5 rocking a fabulous black dress embellished with chains and fringe, and was delighted to be honored alongside fellow nominees, including Eminem, Lionel Richie, Duran Duran, Pat Benatar and Carly Simon.

She also was the recipient of a big chunk of change to make some real change in the world. She received the Bezos Courage and Civility Award worth $100 million from Jeff Bezos on Friday, November 11 and pledged to make the money work for the people. “When people are in a position to help, you should help,” Dolly said in her acceptance speech. “And I know I’ve always said I try to put my money where my heart is. I will try my best to do good things with this money.”

Of course, the year had some low points as well. Sadly, Dolly’s longtime friend and fellow country legend Loretta Lynn passed away in October. “So sorry to hear about my sister, friend Loretta,” she wrote in her tribute Instagram. “We’ve been like sisters all the years we’ve been in Nashville & she was a wonderful human being, wonderful talent, had millions of fans and I’m one of them. I miss her dearly as we all will. May she rest in peace.”

Here’s to an ever better 2023 for everyone’s favorite Dolly!