Gayle: 'I blocked my ex everywhere, but I guess the song got to him'

Courtney Love posted on her Instagram account in January 2022: “Is this the best chorus ever? Damn, I wish I’d written that song. He was referring to the song of a then unknown Gayle (18, Texas) whose chorus is: “Fuck you, your mother, your sister, your job, your car garbage and that shit to the What you call art , fuck you and your friends i’ll never see again, fuck everyone but your dog.The song and the singer quickly reached the highest peak of fame that can be reached in the 21st century: going viral on TikTok and, with him, appearing on all Spotify trending charts. abcdefu It was his letter of introduction and statement of intent: candy pop with the acidity of teenage angst, typical of punk. A year later, Gayle had a contract with Atlantic Records (part of Warner Music), an album, A Study of Human Experience Vol 1 & 2and recently announced that she will be an opening act for Taylor Swift’s upcoming tour, The tour of eras, in which Haim or Phoebe Bridgers will also be. Despite her youth, Gayle is not a rookie: she grew up listening to Aretha Franklin, Nina Simone, Dolly Parton or Kelly Clarkson. He started singing at the age of seven and writing his lyrics at the age of 10. From there, he started doing it in recitals, rodeos and supermarkets: “Anywhere they let me sing”, he confesses. Her family moved from Texas to Nashville, as they believed Gayle would have more opportunities there to pursue her career in music and possibly succeed, which happened when she was 17.

How does it feel to see millions of people humming their post-breakup revenge on TikTok?
It’s incredible. Now I laugh, because I no longer have the same feelings towards this person. I don’t even wish his mother any harm, poor thing. I wrote this song with my best friend when I was 16, we were alone in the studio and as soon as we started racing we wrote it right away. I think in any breakup, there’s a point where you have to hate the other person. You have to get over it, and for that you have to get angry, you have to let go. During this relationship I suppressed my feelings, never got angry, never raised my voice, never said what I thought for fear of losing or hurting him. . And as I cut, I realized that if you don’t say anything during the relationship, they stay with you. I thought, “Fuck him.” With this song, I free myself. And we were number one on the radio.

Why do you think this song has been talked about so much?
Seems to me there’s a lot to get angry about right now, especially after the pandemic. The world continues to no longer be the same. We don’t know what it will be like in 5 or 10 years. There are many unknowns and few certainties. And I think people need a place to vent that anger, where they can scream and stop suppressing all those emotions, whether it’s because of a relationship or because of the current economic situation, because of your family or because of politics. Sometimes you just need to tell someone “fuck you”.

Did your ex hear the song?
I have no idea, I blocked it everywhere! [Se ríe]. He hasn’t contacted me, but I imagine he will have received it. And he probably thinks that’s crap, because he’s not independent like he used to be. How could he admit he heard something that became so to integrate? Please!

A year later, you’re releasing an album, you’re performing at the European MTV Music Awards gala and you’re about to go on tour with Taylor Swift, how are you feeling?
I’m glad my life has changed overnight, but I don’t feel any different, or more valuable, or more special. What happened was that a song I wrote was liked by people and the song became popular. That’s how it works. And I try to enjoy this success without it affecting me. Because success can make you love yourself more, but what happens when you don’t? The same positive comments you read on the internet can turn negative, one day you’re up and the next you’re down, and my confidence can’t depend on that. I try to have confidence in what I’m doing without wondering whether it will be successful again or not, but I do it because I like it.

Was he a Taylor Swift fan?
Very fan! I grew up in Nashville since I was 12. She moved to the same town when she was 14 to make music. And there, Taylor Swift is a legend, especially among those who write their own music and among women. I love everything he’s done, I’ve been dying to have written some of his lyrics, I’ve been to his concerts…

How did they meet?
In Nashville, there is a major association of songwriters, called the Nashville Songwriters Association International, which holds an annual awards gala. At the last gala, which was held in September, Taylor Swift was receiving the artist of the decade award, and I had to perform, because I had received recognition for my song. Go figure. Her there, listening, and me on stage, singing. A few days later, he called me and said, “I want you to be one of my first acts.”

What was your reaction ?
At that time, everything didn’t matter to me. I was in a cloud. The words just came out. I had to express my gratitude to her for showing young women that they can do it, because she is the role model. She is the image of resilience, of fighting despite the criticism received, of always working hard and of pursuing a career according to her principles. Clearly I wouldn’t be here today if she hadn’t been here first.

You and Swift both write lyrics where you open up and show vulnerability, doesn’t that make you a little giddy?
I always have an intimidating or even a little scared feeling when I release a new song. When you show yourself transparent, you can always be ridiculed or mocked, there will always be someone who will say they don’t like it… but I’m not afraid to compose on things that I might regret later if at that time I felt them and believed them.

What would be your goal in 10 years?
To tell you the truth, my real goal in life is not to become a complete asshole. I think a lot of assholes don’t realize they’ve become assholes, so hopefully I’ll work hard not to become like them. 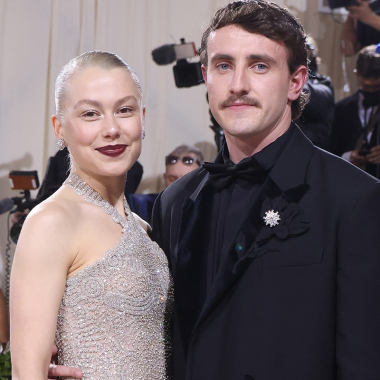 These are the Preysler-Vargas Llosa of Gen Z: Why Paul Mescal and Phoebe Bridgers’ split broke the internet’s heart

Diane Keaton, 77, Busts A Move To Miley Cyrus’ New Song ‘Flowers’: She ‘Gave Me A Reason To Dance’