Kirstie Alley's Ex-Husband Parker Stevenson Mourns His Former Love After Shocking Passing: 'You Will Be Missed'

Dr. Dre, Interscope and Flipper's Set to Flip Hollywood Palladium Into a Roller Rink Party to Celebrate 'The Chronic' (Exclusive)

Like many, the death of Kirstie Alley at age 71 left her ex-husband, actor Parker Stevenson, heartbroken. Parker, 70, paid tribute to his wife and the mother of his children – daughter Lily and son True – on Dec. 5, shortly after the news of the Cheers star’s passing. “Dear Kirstie, I am so grateful for our years together,” Parker wrote while sharing a photo of him alongside Alley, “and for the two incredibly beautiful children and now grandchildren that we have. You will be missed. With love, Parker.” 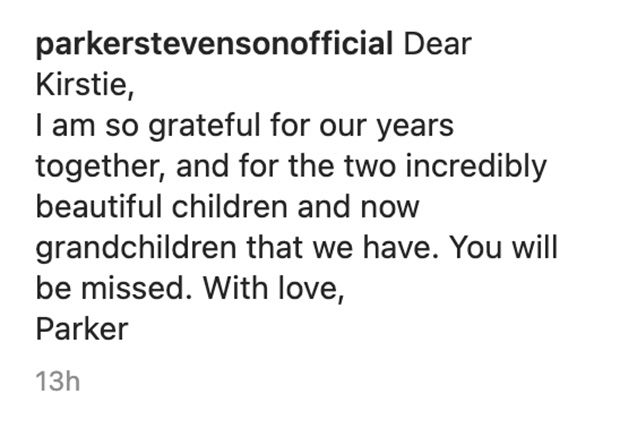 Kirstie and Parker tied the knot on Dec. 22, 1983. The two adopted their children – Lillie, 28, and 30-year-old William (who goes by True) after they encountered pregnancy issues. In 2106, True blessed his parents by giving them their first grandchild. By then, Kirstie and Parker had been divorced for almost two decades. The couple called it quits in 1997.

The news of Kirstie’s death broke late Monday night. “To all our friends, far and wide around the world… We are sad to inform you that our incredible, fierce, and loving mother has passed away after a battle with cancer, only recently discovered,” read the statement that Kirstie’s official social media accounts shared. “She was surrounded by her closest family and fought with great strength, leaving us with a certainty of her never-ending joy of living and whatever adventures lie ahead. As iconic as she was on screen, she was an even more amazing mother and grandmother.”

The announcement of Alley’s death thanked the staff at the Moffitt Cancer Center for caring for him Look Who’s Talking Star. “Our mother’s zest and passion for life, her children, grandchildren, and her many animals, not to mention her eternal joy of creating, were unparalleled and left us inspired to live life to the fullest just as she did.”

In 2012, Kirstie opened up about her love life. She spoke about how she fell in love with costars Patrick Swayze (who starred with her in North and South) and John Travolta. “Believe me, it took everything that I had, inside, outside, whatever, to not run off and marry John — and be with John for the rest of my life,” she said via Huffington Post. At the time – 1989 – Travolta was single, while she was not. When asked why she didn’t leave Parker, Kirstie said, “Because I feel like when you marry someone, you’re supposed to work hard at it, and you’re supposed to make it work.”

Kirstie Alley’s Husband: Everything To Know About Her 2 Marriages To Parker Stevenson & Bob Alley

‘The Resident’ Fall Finale Exclusive Preview: Padma Runs Away From Her Babies