Jane Fonda, 84, announced on Sept. 2 that she has lymphatic cancer and that she’s well into her chemo treatments. “This is a very treatable cancer. 80% of people survive, so I feel very lucky,” she wrote, showing some optimism. “I’m also lucky because I have health insurance and access to the best doctors and treatments. I realize, and it’s painful, that I am privileged in this. Almost every family in America has had to deal with cancer at one time or another and far too many don’t have access to the quality health care I am receiving and this is not right.”

She then wrote about the lessons she has learned from dealing with cancer. “One thing it’s shown me already is the importance of community. Of growing and deepening one’s community so that we are not alone. And the cancer, along with my age –almost 85– definitely teaches the importance of adapting to new realities,” she stated.

Unsurprisingly, Jane was met with good wishes from a myriad of stars. Scroll on to see the kind notes sent from Reese Witherspoon, Alyssa Milanoand more

The Legally Blonde star, 46, sent “all” her “strength” to Jane in the comment section under the announcement post. “Love you Jane,” she said added. 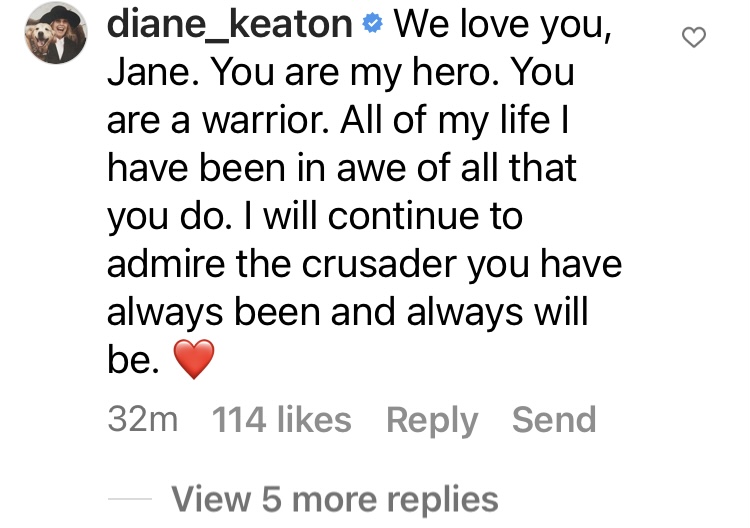 Mack & Rita actress Diane Keaton, 76, let Jane know how much she admires her in the touching comment she penned. “We love you, Jane,” she said began. “You are my hero. You are a warrior. All of my life I have been in awe of all that you do. I will continue to admire the crusader you have always been and always will be”. 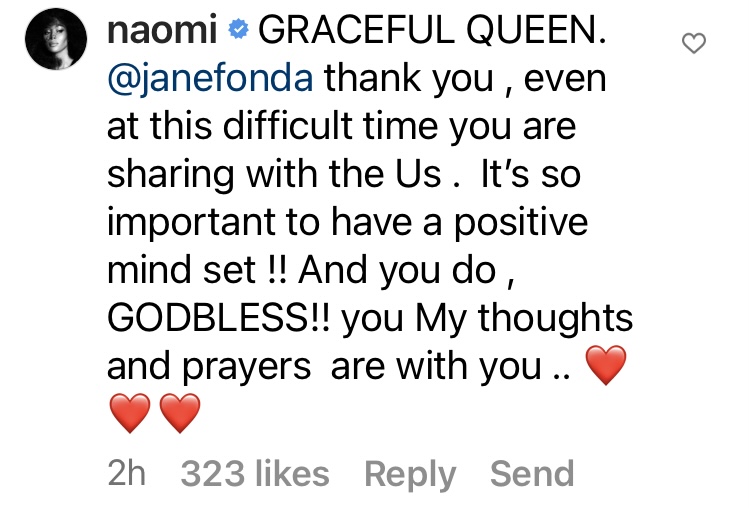 52-year-old model Naomi Campbell sent Jane an uplifting message and called her a “graceful queen” when she found out. “Thank you, even at this difficult time you are sharing with us. It’s so important to have a positive mindset!! And you do. GODBLESS!!”

Emily in Paris Star Lily Collins, 33, also sent a sweet message. “Sending you so much love and light and all the positive thoughts possible,” she commented. “How beautifully said and strong you are.” 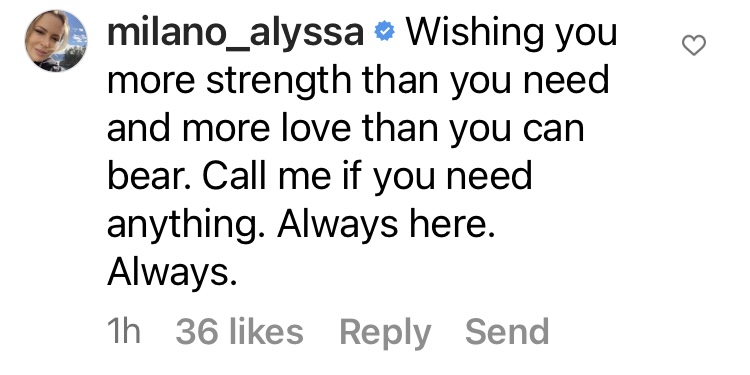 Charmed alum, 49, wrote, “Wishing you more strength than you need and more love than you can bear.” She also said she was around if Jane ever needed to talk and that she is “always” here for her.

Chelsea Handler47, let the Book Club actress knows she is “always” on her mind. “Love you, Jane. Thinking of you, always,” she wrote under her post. 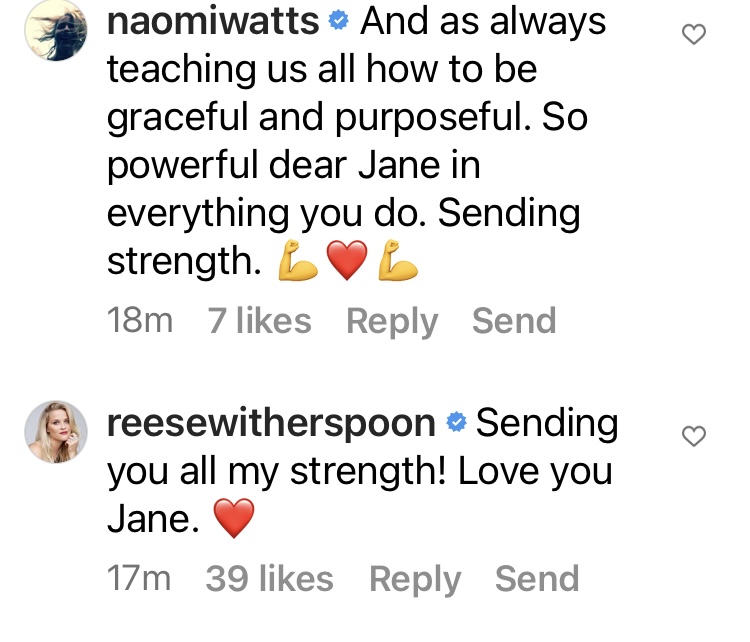 British actress Naomi Watts, 53, applauded Jane for being so inspiring. And as always teaching us all how to be graceful and purposeful. So powerful dear Jane in everything you do. Sending strength,” she wrote, just one minute before Reese commented.

News reporter Katie Couric65, also admired the Nine to Five star for her grace. “Handling this with grace, intelligence and selflessness, as always.” she gushed. “Holding you in our hearts.”

Model Tess Holliday37, wrote a simple note to Jane, reminding her that so many people love her.