Hands On: Crisis Core is a welcome reunion with Final Fantasy VII

It’s been nearly two and a half years since Square Enix reinvented the story of their 1997 JRPG classic Final Fantasy VII , and we’re itching to see what the Japanese publisher has in store next. Final Fantasy VII Rebirth will provide those answers next winter, but to tide us over until then, Crisis Core: Final Fantasy VII Reunion represents a welcome stopgap. The memorable PSP side story has been remade for PS5 and PS4, and it promises to be another weird, campy, and fun adventure.

A very brief but action-packed demo introduces us to Zack as he fights his way through the game’s first chapter. It’s a combat system that feels familiar in some ways, but completely different in others. Like the Final Fantasy VII Remake, there is no turn-taking. You’ll be throwing your sword with the face buttons, and then activating your elemental powers through button combinations. It won’t take long for fans of the 2020 remake to get up to speed, but there are some key differences to note.

In the upper left-hand corner, a type of slot machine featuring pictures of numbers and letters is forever scrolling. This is called a digital mind wave, and if it lands on certain numbers or matches the same character three times in a row, the materia will become stronger, Zack can be healed, or other attacks will improve. As a newcomer to Crisis Core, the feature was in dire need of a tutorial, but it doesn’t appear to be part of the game’s first chapter. 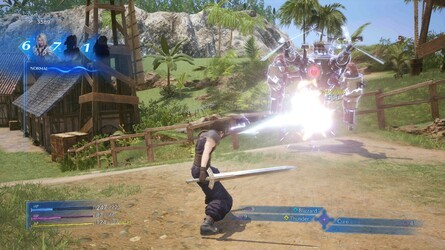 So, we focused on using our MP and AP during battles to survive. If the digital mind wave system produced a positive boon for us, we were sure to use it as soon as the prompt appeared on the screen. A lot of the flashy and powerful attacks were taken from the mechanic, though, so it seems important for progression. Maybe the tutorial was on the other side of the demo we played.

In the first chapter you’re fighting the usual monsters and soldiers you’d come across in a Final Fantasy title, but then there’s also a battle against the Ifrit. This is where the combat system introduces some more complexity with accounting for weaknesses and an interrupted charging phase for enemies. At various moments during combat, the game will alert you to an enemy making a powerful attack. If you take enough damage during this phase, you will actually weaken the attack. The more damage you take, the less you’ll take once the enemy is ready to unleash. This is a neat little feature that keeps you on your toes, minimizing the amount of HP you’re going to lose.

Graphically, Crisis Core can’t compete with Final Fantasy VII Remake Intergrade on PS5, but it still looks good for a remastered PSP title. Environments pop and glow, and so do enemies. Consistent with the control scheme of Square Enix’s previous remakes, there are no unusual button prompts or awkward onboarding for the account. Thus, it seems that on December 13, 2022, Crisis Core will make a smooth transition from Sony’s first handheld device to the big screen. While Square Enix prepares its next twist in the Final Fantasy VII story, this seemingly loyal remaster should please fans and newcomers alike. similar

Will you be playing Crisis Core: Final Fantasy VII Reunion this December? Let us know in the comments below.