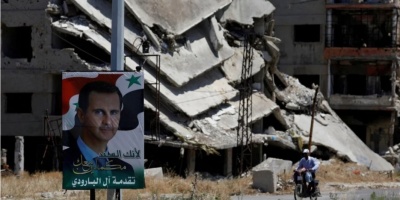 On Thursday, June 30, the Ministry of Foreign Affairs of Ukraine announced the severance of diplomatic relations with Syria and the imposition of sanctions against Syrian legal entities and individuals.

According to the press service of the Foreign Ministry, the agency strongly condemns Syria’s decision to recognize the so-called “independence“ temporarily occupied territories of Ukraine in Donetsk and Luhansk regions.

The Foreign Ministry stressed that they consider it an unfriendly act against Ukraine, an encroachment on its sovereignty and territorial integrity, a gross violation of Ukrainian laws, the UN Charter and basic norms of international law.

“There is no doubt that the Syrian regime is trying to give pseudo-subjectivity to the Russian occupation administrations in Donetsk and Luhansk at the behest of its Kremlin curators. In response to this unfriendly act, Ukraine declares the severance of diplomatic relations with Syria without the severance of consular relations, in accordance with Article 2 of the 1963 Vienna Convention on Consular Relations“– it is told in the message.

The Foreign Ministry added that Ukraine is launching a procedure to impose a trade embargo against Syria and sanctions against Syrian legal entities and individuals.

“Our position is clear – we react as harshly as possible to any attempts to undermine the sovereignty and territorial integrity of Ukraine and protect national interests in all available ways, including on the diplomatic front.“– the Minister of Foreign Affairs Dmitry Kuleba declared.

The agency reminded that due to the crimes of the regime of Bashar Assad against the Syrian people, Ukraine closed the embassy in Damascus in 2016 and in 2018 instructed to close the Syrian embassy in Kiev. The Ukrainian embassy in Lebanon protects the interests of Ukrainians in Syria.

The day before, President Volodymyr Zelensky said that after the Assad regime recognized the pseudo-republics “L / DNR“ “there will be no more relations between Ukraine and Syria, and the pressure of sanctions against Syria will be even greater“.

On June 29, Syria recognized “independence“ terrorist groups “DNR“ and “LNR“. On February 25, the pseudo-republic was recognized by unrecognized Abkhazia.

Biden announced the supply of air defense systems to Ukraine and even more HIMARS: details