The Asian Cup will start on August 27. The big match between India and Pakistan will be held on August 28. In which the eyes of the world are fixed. 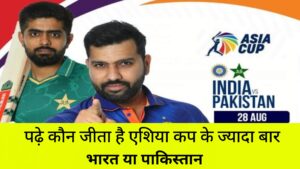 Asia cup 2022 battle is announced, ind vs pak match is scheduled to take place on 28th august in this tournament starting from 27th august. Sri Lanka was supposed to host the Asia Cup, but due to the poor economic condition of Sri Lanka, it will now be hosted by the UAE. Teams from India, Pakistan, Sri Lanka, Bangladesh and Afghanistan are participating in this Asia Cup. One team will qualify and join the group of India and Pakistan.

So far 14 matches have been played between India and Pakistan in the history of Asia Cup. Team India won eight of those matches while Pakistan won only five matches. There was such a match, the result of which is not out In 1984, the first match between India and Pakistan took place. In this first match, team India won by 54 runs. What is also special is that earlier the Asia Cup had a one-day format, i.e. 50 overs but was later reduced to just 20 overs. This year, the Asia Cup will also be played in the T20 format.

Rohit just one step away from equaling Virat Kohli’s record, Dhoni on top