Asia Cup 2022: Indian squad to be announced today, Rohit will have to work hard for 10 players to pick 5. 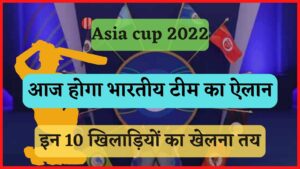 By winning the tour of West Indies 4-1, the Indian team has proved itself as a strong contender for the Asia Cup 2022. 6 teams will participate in this tournament starting on 27th August. In such a situation, this time Asia Cup will be very exciting. According to media reports, August 8 is fixed as the last date to announce the team for Asia Cup 2022. Therefore, the team should be announced tonight.

With the squad selection in this Asia Cup, the Indian team picture for the upcoming T20 World Cup will become somewhat clear. If we talk about India’s 15-member squad, then the selection of 10 players is considered certain, while selecting the remaining 5 players, Rohit Sharma and the selectors will have to work hard.

These 10 players are considered fixed

For the remaining 5 players, there will be a battle between 8 players. Talk about whether Ishan Kishan was considered as a back-up batsman for the opener, but after the opening of Surya Kumar Yadav in the West Indies tour, Ishan Kishan’s place is in jeopardy. It now remains to be seen whether the selectors will be the reserve player specialist for the opening Asia Cup. choose or not.

In the middle order, India have players like Virat Kohli, Surya Kumar Yadav and Rishabh Pant. There will be a battle between Shreyas and Deepak Hooda as back-up middle order players. Deepak Hooda who is in form.

Along with Jadeja, the arrival of Chahal and Ashwin in the bowling is considered certain. If we look from the perspective of T20 World Cup then only one will get a place in Chahal and Ashwin. So in the upcoming UAE Asia Cup, there will be a good battle between these two.

If we talk about fast bowling, then its command will be in the hands of Bumrah and Bhuneshwar. Harshal Patel, Avesh Khan and Arshdeep Singh might get a chance. With Harshal still injured, there is a lot of speculation whether Arshdeep and Avesh Khan will get a chance in the team.