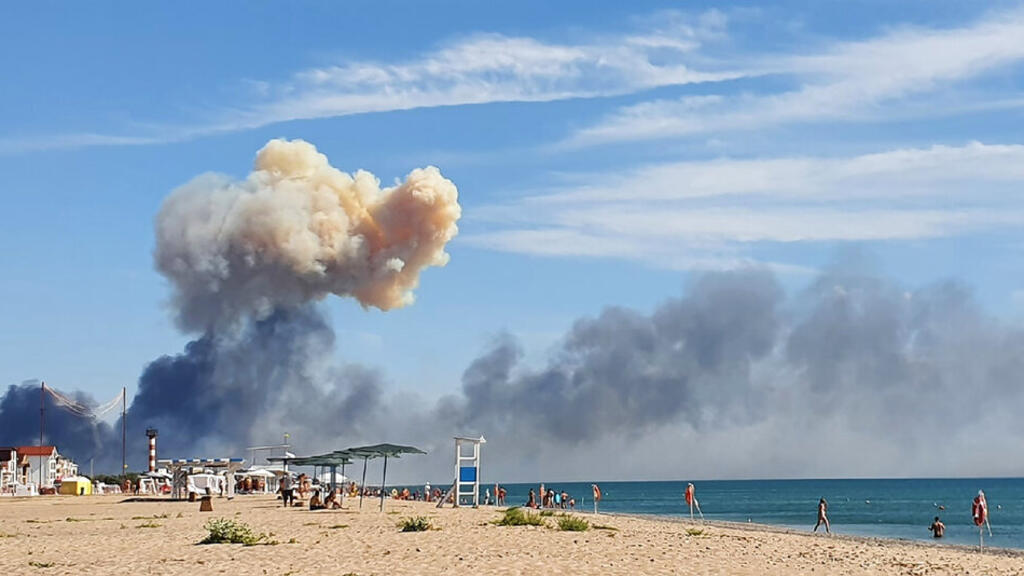 The circumstances of Tuesday’s major explosions at a Russian airport in Crimea are unclear. But experts agree that if Ukraine is responsible, the military may have received support from resistance groups there. The role of the pro-Kyiv “partisan” in the territories occupied by Russia is becoming increasingly important.

The mystery remains, almost 24 hours after the explosion at a Russian military air base in Crimea, Wednesday 10 August, surrounding the circumstances of the incident that, officially, killed one and injured several.

Moscow maintains that this is an accident involving an explosion at an ammunition depot. But the Russian governor of Crimea, Serges Aksionov, raised the terrorist alert level at the same time, suggesting that officials fear sabotage actions and are “becoming more concerned about security in the region”, assuring the New York Times. Gave.

In Kyiv’s side, it is a very different version of the facts that have been put forward. “A Ukrainian government official, speaking on condition of anonymity, told the Washington Post that this was the work of Ukrainian special forces,” he said. Twitter stresses on Isabelle KhurshudayanHead of the Ukraine Bureau of American Newspapers.

The New York Times says that Ukrainian military officials assured that the attack was carried out by “resistance groups loyal to Kyiv and operating in Russian-occupied territory”.

The possibility should also not be excluded that the Ukrainians managed to hit this airport with a missile. “Videos available from yesterday show significant damage, not compatible with the thesis of sabotage at the site – requiring large quantities of explosives, probably difficult to transport near a base well protected by Russian forces”, Hussein Aliyev, underlines expert Ukrainian-Russian conflict at the University of Glasgow.

But the missile thesis has a catch: Russia’s Novofedorivka airport is more than 200 kilometers from the front line, and the only weapon capable of attacking at such a distance was delivered to Kyiv by NATO allies.

These nations have always insisted that their military equipment be used only for defensive purposes and not to drive Russia out of Ukrainian territory. Perhaps this is why Ukrainian officials are making several statements on the condition of anonymity that this was an operation carried out by a resistance network or Ukrainian special forces.

The Russians’ insistence on attributing these blasts to an accident is also understandable: if Ukraine was able to hit a target so far from the front line, “it would be a disgrace to Moscow and its intelligence services”, the judge said. Taras Fedirko, political scientist and anthropologist specializing in Ukraine at Saint-Andrew University, Scotland.

The pro-Russian governor of Kherson was poisoned

Even if it had been a missile launched from Ukraine, it probably would not have been able to hit the mark “without the support of pro-Kyiv partisan groups at a site providing useful information such as GPS coordinates”, Hussein Aliyev believes.

These explosions in Crimea are a reminder that the war is not fought only at the front: in the Russian-occupied territories, Kyiv is “relying more and more on a network of resistance or partisanship to inflict blows on the Russian army”, Hussein Aliyev They say .

This is especially prominent in Kherson in the south of the country, where Volodymyr Saldo, appointed in April by the Moscow governor of the region occupied since early March, was poisoned and then taken to a hospital in Russia, Sunday 7 August. . An operation that would have been carried out by local resistance. “The city is regularly attacked by pro-Ukrainian partisans in the evenings on Russian patrols,” says Hussein Aliyev.

Alexander Motil, a US expert on Ukraine, said other occupied cities in the south of the country are increasingly the scene of acts of sabotage or targeted killings. On the military blog “1945”, he listed about twenty incidents that had occurred since the beginning of April in Melitopol and Berdyansk – between Kherson and Mariupol – and around Zaporizhia, a little further north.

These attacks take a wide variety of forms such as the killing of Russian soldiers, a pro-Russian Ukrainian blogger, railway sabotage or even attacks on Russian radar stations.

Guerrilla acts that Russia should have expected from the moment its troops planted a boot on Ukrainian soil. The propaganda of partisan groups has been part of “Ukraine’s defense strategy since 2014”, The Guardian daily recalled.

War propaganda and a real threat to the Russian army

In January 2022, as the Russian-Ukrainian crisis escalated, Kyiv “passed a law on the defense of the region providing a legal framework for the creation of voluntary fighters’ groups”, underlines Taras Fedirko.

But it was “not until mid-April that these resistance fighters were operating on the ground”, specifies Hussein Aliyev. Most networks had long existed only on paper because “the structures were not financially and logistically supported by the authorities”, the researchers say.

For Taras Fedirko, it is still difficult to know to what extent these groups of partisans are made up of local resistance fighters or outside elements, “whether soldiers or members of special forces”. “In any case, there is a level of sophistication in the organization of operations – planning poisoning, following targets or blowing up railway tracks – that requires military training for at least some members of these groups. “, believes Taras Fedirko.

It is also complicated to know to what extent Kyiv deliberately exaggerates the effectiveness of these partisans. “This is clearly part of war propaganda,” recognizes Hussein Aliyev. Some groups, such as the Bardiansk Partisan Army, are very active on social networks to entice invaders or Ukrainians to cooperate with the Russians. “Their goal is quite clear: to suggest that as long as there is resistance there is always hope and to convince potential allies that they are being watched”, summarizes Taras Fedirko.

But there is also part of the exaggeration, “these resistance fighters have become a very serious problem for the Russian army”, assures Hussein Aliyev. On the one hand, acts of sabotage and targeted killings “force part of the Russian troops to focus on partisan hunting instead of fighting at the front”, observes Taras Fedirko.

On the other hand, “it is also an important source of information for the Ukrainian military”, estimates Hussein Aliyev. For him, Ukrainian artillery at the forefront of following Russian movements, could not effectively target Russian ammunition depots without information transmitted by these partisans.

That is why the explosions at the airport in Crimea are important. “It must not be forgotten that until now, there were no or little signs of any resistance in the region”, stressed Hussein Aliyev. If the attack was indeed carried out with local support, it means that “Kyiv decided to invest in the development of a network in Crimea”, notes this researcher. In other words, the supply lines from this area – essential for the Russian offensive into southern Ukraine – would no longer be safe for Russian forces.