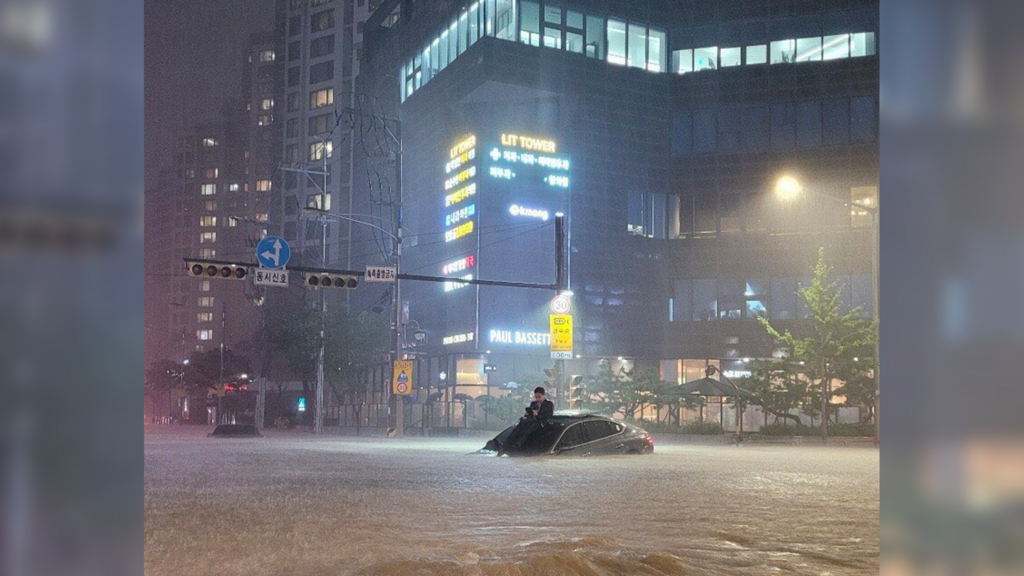 On the morning of August 10, the skies over Seoul calmed slightly after three days of heavy rain, causing historic flooding in and around the South Korean capital. On the night of August 8-9, some areas south of the city received more than 140 mm of rain per hour. According to the Korean Meteorological Agency (KMA), for the first time in 80 years. As of August 10, at least 16 people were killed or missing and more than 2,500 homes were flooded, according to the Yonhap news agency.

Several videos show water flowing from a manhole, near the University of Seoul, southwest of the city.

Water has risen rapidly in many underground locations in the city, notably in some metro stations and car parks, but also in residences located halfway below ground level, or “banjiha”. Death of a family of 3 people drowned in one.

An apartment half below the ground, where three people were killed on 9 August, in front of South Korean President Yoon Sek-yol and the rescue team “Banjiha”.

A video shot on August 8 shows water flowing from the roof of the Isu Metro station. Several Seoul-area subway and train lines that had been suspended were running again on Wednesday, August 10.

One image in particular has become a symbol of flooding on social networks. We see a man dressed as a businessman sitting on the hood of his car and surrounded by water, taking pictures with his phone.

Many Internet users were amazed at the man’s ability to take pictures of the man in the picture as if nothing had happened.

The second picture that went viral during these floods is of this man swimming in streams of rain water. In a widely shared Youtube video, he was nicknamed “Silim-dong Phelps” in reference to American swimmer Michael Phelps and the road where the video was taken (in Silim-dong, southeast Seoul). The video posted with a soundtrack of laughter was heavily criticized – with many Koreans pointing out dangerous and inappropriate behavior in the wake of the flood victims.

Related Topics:AsiaAsia PacificSouth Korea
Up Next